What Can I Do Under Edmonton’s RF3 Zoning?

Situate is a planning consulting firm specializing in rezoning, permit and subdivision coordination services for awesome infill projects. In our How To series on Edmonton’s standard zones, we dive into the nitty gritty of Edmonton’s most common infill zones and overlays.

The RF3 zone is pretty great for small scale infill because it allows for all of the same housing forms as the RF1 zone—single detached houses, duplexes, semi-detached housing, secondary/basement suites, and garage/garden suites—PLUS row housing. And with (mostly) simpler regulations, to boot.

Read on to find out what you can do in the RF3 zone (and what you should watch for).

What this means is that in the RF3 zone, a lot can be created according to the minimum dimension for both width and length (7.5 m x 30 m = 225 m2). By contrast, in the RF1 zone, either the width or the length of the lot has to be longer than the minimum in order to achieve the required minimum lot area of 250.8 m2. 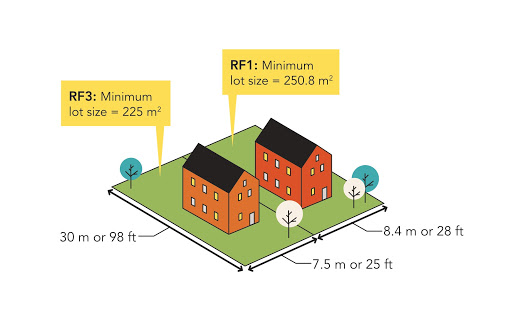 The RF3 zone also lets you build duplexes and semi-detached houses, and the great news is that the minimum lot dimensions for those housing types are far simpler to figure out in RF3 than in RF1: it’s simply a minimum of 7.5 m for lot width and and 30 m for lot depth. That doesn’t mean, though, that you can build a duplex on a teeny tiny little lot, because the minimum lot size is calculated by multiplying the number of (principal) dwellings on the lot by 150 m2 (suites don’t count in this calculation). So, the minimum lot area for duplexes and semi-detached houses is 300 m2 (150 m2 x 2 dwellings = 300 m2). 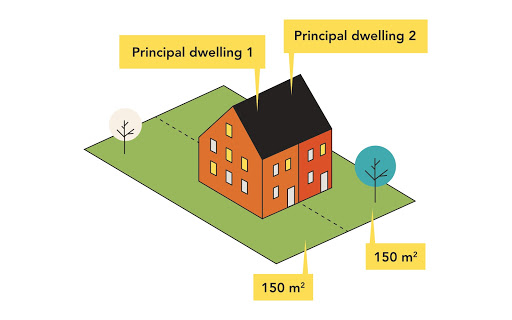 Everything we’ve said so far about the RF3 zone demonstrates that it’s a step ahead of the RF1 zone in terms of simplicity and ease of use. But the really, really great thing about the RF3 zone is that it lets you build multi-unit housing, which means you can build a building with three or more principal dwelling units in it, with the units arranged in pretty much any way, shape, or form.

In practice, multi-unit housing is generally built as row housing (aka town housing), where the dwellings are attached side-to-side and the front doors face the side lot line.

Diagram 3. Multi-unit housing in its most common form—row housing 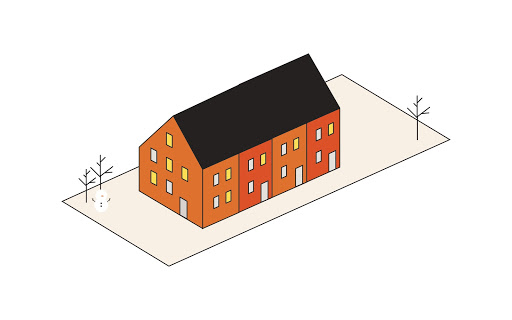 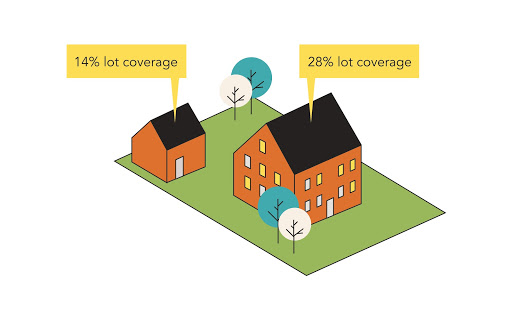 Multi-unit housing gets a boost in lot coverage to a total of 45%, with a maximum of 17% allowed for the garage. If no garage is built, all of the 45% lot coverage can be used for the main building, as long as you still comply with all the minimum setbacks (Diagram 5). Note that you can get an additional 2% bonus on lot coverage for any type of principal building if you include an unenclosed front porch on the front. There’s also a slight bonus for garden suites—more on that later. 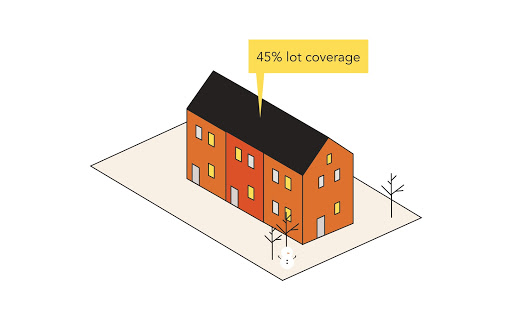 HEIGHT (AND THE MATURE NEIGHBOURHOOD OVERLAY)

It’s very important to note that the MNO reduces the maximum building height in the RF3 zone from 10 metres to 8.9 metres, for all types of housing. (If you’re wondering how to measure height, there’s a section in the bylaw for that).

It’s also very important to note that City of Edmonton development officers (the people who approve your development permit) are not able to grant a variance on height. So, 8.9 metres is all you get (unless you want to try your luck at the Subdivision and Development Appeal Board, but that’s opening an entirely new can of worms).

SETBACKS (AND THE MATURE NEIGHBOURHOOD OVERLAY)

The RF3 zone is pretty simple in terms of its regulations, until it comes to setbacks. Figuring out setbacks in this zone is—well, let’s just say it’s complicated. The setback requirements in the RF3 zone add up to 269 words (a lot), and the Mature Neighbourhood Overlay adds even more wordy regulations on top, so make sure you read both the RF3 zone and the Mature Neighbourhood Overlay very, very carefully (or hire someone like us to do it for you). 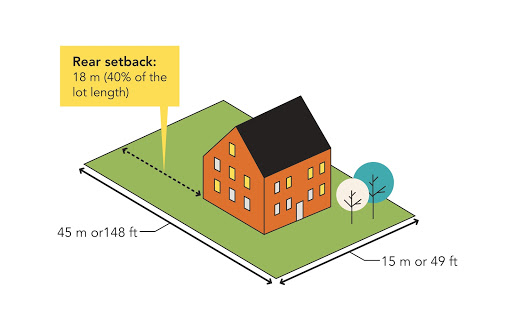 For any building type, the front setback, as regulated by the Mature Neighbourhood Overlay—is either 20% of the lot length or 1.5 m less than the average front setback of the two houses beside you. Whichever number is less. But not less than 3 metres). 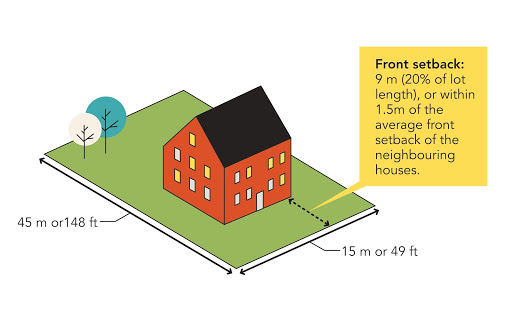 However, if you’re building multi-unit housing on a corner lot, and the front doors face the side lot line: pay attention. 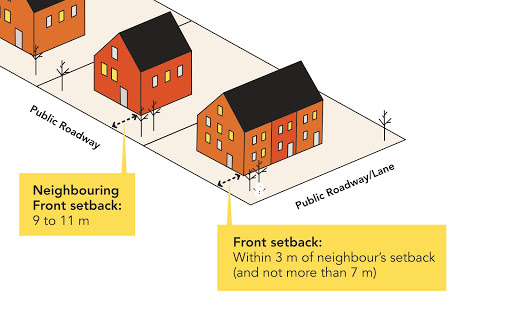 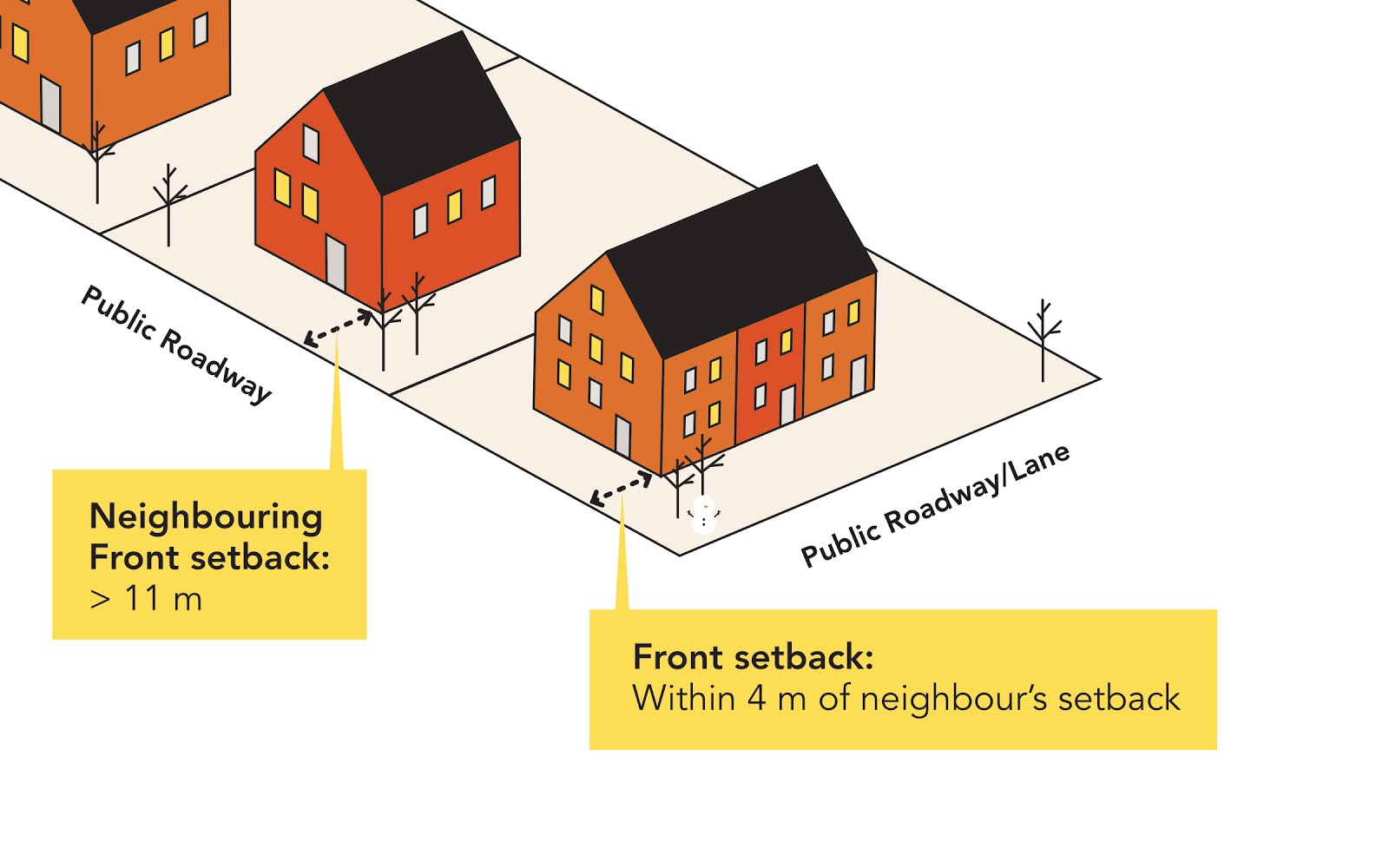 Side setbacks are determined based on lot width, whether the lot is a corner lot, and—if it is indeed a corner lot, what direction the front doors face. What makes side setbacks in the RF3 zone particularly painful to try to understand is that parts of the regulations are found in the MNO, and parts are found in the RF3 zone, and the two sets of regulations continually cross-reference each other. We’ve done our best to disentangle the regulations, below. 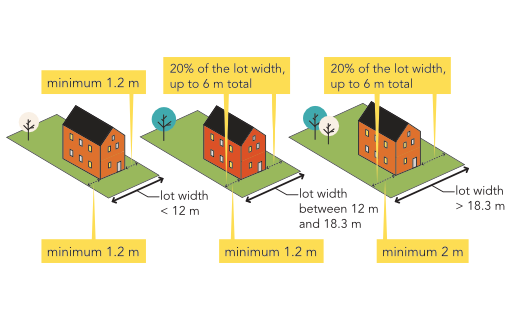 When the building faces the side lot line, the flanking side setback has to be at least 2 m, and if there’s a garage attached to the house, that portion of the building has to be set back at least 4.5 m. 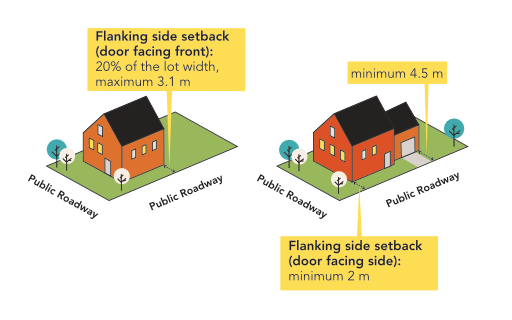 If the building on the corner lot happens to be multi-unit housing, and the building is facing the side lot line, then the interior side setback has to be at least 3 m. 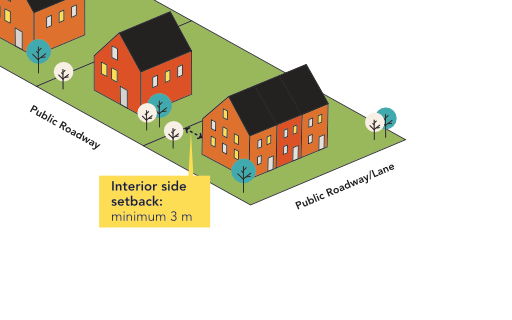 Phew! That was a lot of information. It’s important to understand this however, because setbacks can impact how much of the lot you can build on. The area left over after you figure out all the setbacks is commonly called the building pocket. But watch out: the building pocket may end up having more (or less) area than the maximum allowable lot coverage. Let’s say you want to build multi-unit housing with no parking, or with underground parking, so you don’t need a garage. The maximum site coverage for multi-unit housing in the RF3 zone is 45%. However—if, after you figure out all the required setbacks—only 35% of the lot is left for the principal building, then all you get is 35%, even though the maximum site coverage is so much higher. By contrast, if you figure out the setbacks and determine that 50% is left, the maximum site coverage is still only 45%.

A FEW MORE THINGS TO NOTE!

One last thing about the Mature Neighbourhood Overlay: you are not allowed to have a driveway or garage facing the street. Garages have to be in the back, facing the rear lane. This is true even if you’re building a new house that replaces an old house that had a front garage—you will be required to remove the driveway and garage, rebuild the curb, and put the new garage in the back.

Ok, we know that was a lot of information about the RF3 zone and the Mature Neighbourhood Overlay! Here’s some last few bits of information.

The RF3 zone allows for suites in all sorts of housing configurations. As a reminder, in Edmonton we have different names for different kinds of suites. A suite located in the main house or building is called a secondary suite (usually but not always located in the basement), and a suite located in the backyard is called a garden suite. A garden suite can either be attached to a garage (above it or beside it), or be a standalone building on its own. (For more information on suites, have a look at the regulations for secondary suites and garden suites in the zoning bylaw).

The RF3 zone also allows for multi-unit housing, and in Edmonton, secondary suites can be built in multi-unit housing that takes the form of row housing. That is, secondary suites can be legally built in a building if that building contains three or more units connected side-by-side and not touching in any other way (as in, the units cannot be connected up-and-down or back-to-front). A garden suite can also be built on the same lot as row housing. 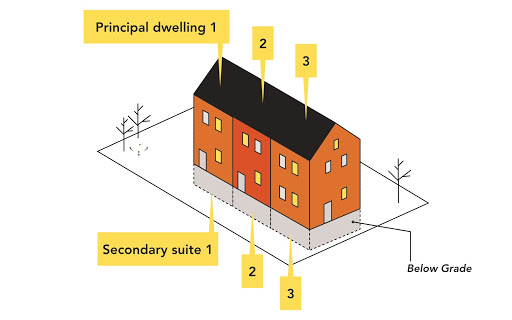 WHAT TO LOOK OUT FOR WITH MULTI-UNIT HOUSING 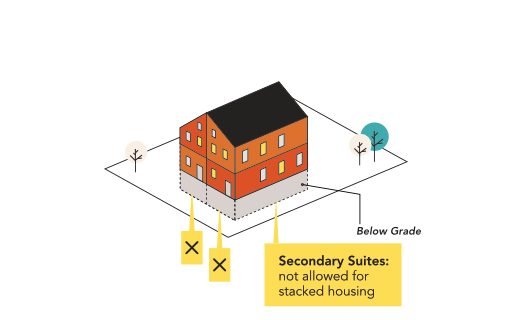 2. Secondly, watch the rear setback very carefully. Although the size of your lot may theoretically allow for four units of multi-unit housing, it can be difficult to achieve all four units, especially if you’re building row housing units. That’s because you will probably have to build the fourth unit in the rear setback area, which would then require a variance to the Mature Neighbourhood Overlay (which may be refused). 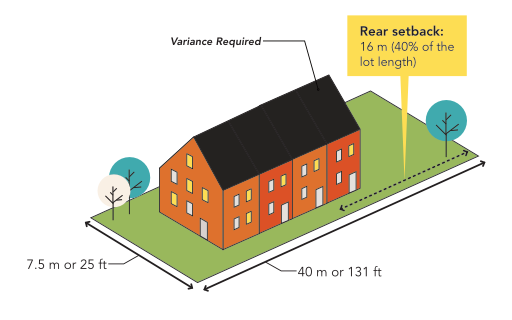 This article was written by Situate, Edmonton’s planning consulting firm specializing in rezoning, permit and subdivision coordination services for awesome infill projects. Regulations giving you a headache? Want help navigating the zoning bylaw? We offer zoning translation services and so much more. Contact us to find out how we can support your next project!

Situate · 3 months ago
@situateinc
Edmonton's City Plan vision is to create a healthy, urban and climate-resilient city of two million people, in part by increasing density in all residential areas of the city, & particularly within "nodes and corridors": key activity areas and roadways.
https://t.co/gNeRNxf647
View on Twitter
0
10